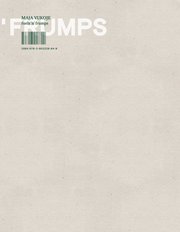 Maja Vukoje (*1969 Dusseldorf, lives in Vienna) is presenting one of Austria’s most essential artists, who occupies an outstanding position in the field of painting. The catalogue provides an overview of her production during the past five years, as her work has increasingly manifested a genuine painterly vocabulary.

Vukoje’s paintings are based on her exploration of political themes such as post-colonialism, gender, and pop culture. Vukoje’s approach is founded on more than just her own migrant experience—she also travels to specific places in order to examine certain cultural phenomena. She then takes the resulting mixture of realities and translates them into a complex, yet easily accessible visual language.

For her latest works, she’s chosen a rather analytical approach toward the process of questioning representation. With its subject of the “Vogelscheuche” (Paul Klee, 1935; “scarecrow"), the exhibition’s title metaphorically alludes to traditional genre depictions of bodies and the objects surrounding them, while the artist—in these politically confusing times—presents for debate their internal states, materials, and the forces that drive and fuel them.