Henri Chopin and the editorial experiment: the revue 'OU' 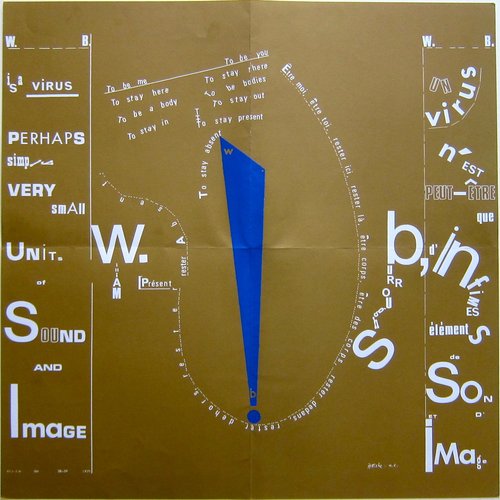 Using many examples of sound and visuals from the zone bordering writing, art, and music, in which language is employed as a material for artistic experiments and, above all, plays a role in acoustic and conceptual approaches, the media artist Marc Matter provides some insight into his research into the multimedia art magazine “OU.” The revue “inclassable” came in an elaborately designed portfolio format, with space for literary, visual, and sound experiments, and was published by the Paris-based sound poet, artist, and publisher Henri Chopin from 1964 to 1974. It contained contributions in various forms: posters, loose sheets, sculptural and object-like bricolage, and vinyl records by artists and authors such as Bernhard Heidsieck, Paul de Vree, Sten Hanson, Ake Hodell, Hugh Davies, Bob Cobbing, François Dufrêne, John Cage, Tom Phillips, Michel Seuphor, Ben Vautier, Jiří Kolář, William S. Burroughs, Brion Gysin, and Annea Lockwood.

Marc Matter was born in Basel, Switzerland, in 1974 and is a media artist, primarily in the field of audio, as well as a founding member of the artists’ group Institut fuer Feinmotorik (Institute for fine motor skills). He studied at the Kunsthochschule für Medien (Academy of media arts) in Cologne, Germany, and finished his studies with an artist’s book titled “Feinmotorik Kompendium” (Maas Media, 2005). Among his fields of research are artists’ books, conceptual literature, poésie sonore, and acoustic art. He has been a lecturer in Music and Text at the IMM (Institut fuer Musik und Medien) in Düsseldorf since 2010. In 2011 he received the Karl Sczuka Prize for Radio Art, for his piece “Die 50 Skulpturen des Institut fuer Feinmotorik.” In 2012 he received a grant from the Jan Van Eyck Academie in Maastricht, and in 2013 he was a fellow at the Beinecke Library, Yale University (USA), where he did research into the review “OU” by the French artist and publisher Henri Chopin.