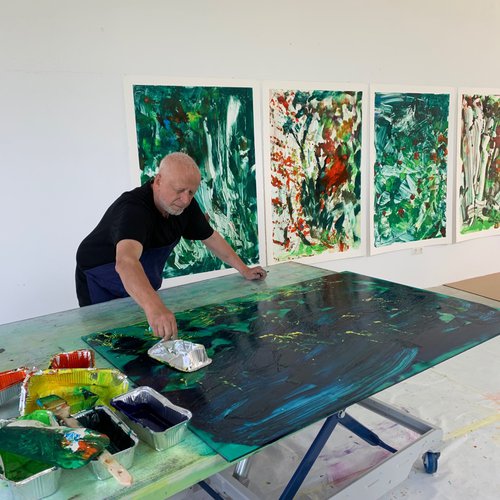 In the context of the current exhibition "24/7," curator Sandro Droschl presents the catalog.
The exhibition "24/7" (Twenty-four/Seven) explores the intermediary in Brandl's work:
His last cycle of works from 2020 consisting of 24 monotypes (original, unique prints of paintings) is juxtaposed with an early cycle of 7 ink works in shades of black from the late 1980s, each of which seems to be painting but is not—or is it? The presentation of the works, all of which have not yet been shown, is exhibited in a hanging that plays with the late modern "white cube" architecture of the exhibition house. “24/7" makes it clear where Brandl began and what he continues to refer to—the Conceptual Art of the 1970s and its questioning of the concept of the work. Thus, a starting point is laid in his painting, which continues to claim the artist in various shades and forms.

The catalog is published by Verlag der Buchhandlung Walther und Franz König, Cologne and contains, in addition to numerous illustrations, a detailed work text by Robert Fleck, an art historical classification by Christoph Bruckner, and a curatorial statement by Sandro Droschl.