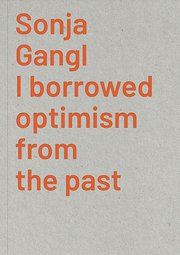 I borrowed optimism from the past

The exhibition “I borrowed optimism from the past” by Sonja Gangl marks a turning point in her practice: the Austrian artist, who is primarily known for her consistent examination of the medium drawing, presents a new cycle of works at the Künstlerhaus, Halle für Kunst & Medien that consists of large-format paintings. With the “Supra-Linien” (2019/20) Gangl moves from figurative representations to the field of abstraction for the first time and makes conceptual reference to the optimism of the American Abstract Expressionism of the 1960s. The catalogue focuses next to this new series also on the numerous other original productions that were created especially for the exhibition. Next to scientific contributions by authors Jana Franze (KM– Graz), Peter Geimer (Freie Universität Berlin), and Elsy Lahner (Albertina Wien) on the artistic practice of Sonja Gangl, the publication includes a lyrical commentary on optimism today by the Austrian author Robert Woelfl, and an introduction by Sandro Droschl (KM– Graz).

Sonja Gangl (*1965 Graz, lives in Vienna) studied at the Academy of Fine Arts Vienna under Markus Prachensky and at the University of Applied Arts Vienna under Ernst Caramelle. Since 2003 she has been a member of the Vienna Secession. Her exhibition “Dancing with the End” (2013–14) was the first solo presentation that the Albertina Museum in Vienna dedicated to a woman artist. Gangl’s work has also been shown at numerous other art venues and is known beyond the border of Austria. She has had solo exhibitions in the Studio of the Neue Galerie Graz (1998), at Kunstverein Wolfsburg (1999 and 2000), Museum Moderner Kunst Kärnten (2016), and more than once at Atelier Contemporary in Graz (2009, 2014, and 2019) and Galerie Krobath in Vienna (2015 and 2018). In 2010, Gangl represented Austria at the biennale Women & Art 2010 at the Sharjah Art Museum in the United Arab Emirates. At the Künstlerhaus, Halle für Kunst & Medien the artist already exhibited her work in 2014 as part of the group show “Words as Doors in Language, Art, Film.”Aside from the Achievement Prize for Fine Arts of the Province of Styria (2018), Sonja Gangl has also been honored with the Prize of the City of Vienna for the Visual Arts (1992), the Art Achievement Prize of the City of Graz (2002), the Promotion Award of the Province of Styria for Contemporary Fine Arts (2004), the BAUHOLDING-STRABAG Art AWARD (2005), the Art Prize of the City of Graz (2008), and the City of Vienna Prize for Fine Arts (2016).