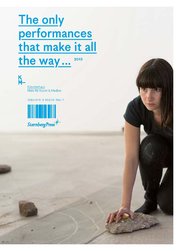 Concept and graphic design by Nik Thoenen and Maia Gusberti

The only performances that make it all the way ... Yes, but is it performable?

The catalogue is published on the occasion of the two group exhibitions “The only performances that make it all the way...“ and “Yes, but is it performable? Investigations on the Performative Paradox“ which was shown at Künstlerhaus, Halle für Kunst & Medien in 2013 and 2016.

Both exhibitions are united by an activating dialogical confrontation of recent, performative practices and performances dealing with the main works of historical forerunners. Throughout the respective exhibition, two to three works were added, while also parts and objects of the performances remained in the exhibition space, thus the exhibition set-up presented itself as transparent and could be experienced by the audience.