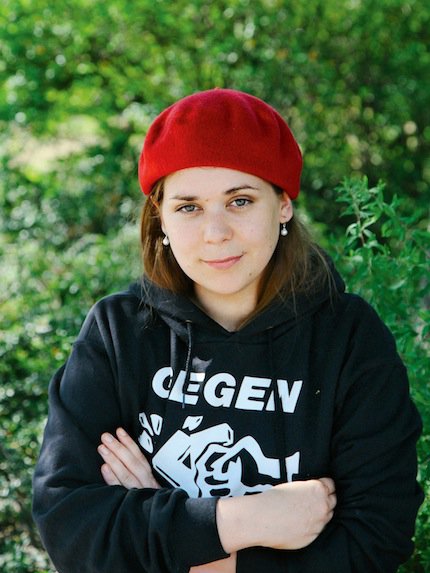 In the beginning of 2019, Stefanie Sargnagel made headlines when she posted a tweet commenting the decision of the Austrian broadcast ORF on who to send to the Eurovision Song Contest. The broadcast decided to send the electro pop musician Pænda to the Eurovision Song Contest 2019. In the past, Sargnagel has advocated for the singer Hyäne Fischer. After the decision was announced, she published a post on the social media platform Twitter: “Austria, you stupid son of a bitch I will kill you.” A few days later, Twitter disabled her account permanently. On the occasion of the exhibition “Deuscthland#ASNCHLUSS#Östereich,“ the artist Stefanie Sargnagel invites you to a reading and a contemplation on the boundaries of satire.

Stefanie Sargnagel (*1986 Vienna, lives in Vienna) studied in the master class of Daniel Richter at the Academy of Fine Arts Vienna. As an author she regularly publishes articles on Vice and the Bavarian Broadcast, among others on the Bachmannpreis, the Viennese Opera Ball and the “Oktoberfest” of the Austrian political party FPÖ. Moreover, she has written a number of books: Her experiences as an employee in a call center are the base of her debut work “Binge Living – Callcenter-Monologe”, which was released in 2013. 2015 she published her second book “Fitness,” a collection of Facebook posts. Her most recent book is called “Statusmeldungen,” which was released in 2017 and is also a collection of Facebook posts. Sargnagel is a member of the “Burschenschaft Hysteria,” a feminist group who satirize Austrian fraternities and have called attention to themselves with their performance at the Viennese Academic’s Ball. In 2016 she received the BKS-Bank Audience Prize in the frame of the Ingeborg-Bachmann-Prize. 2017 she was writer in residence of Klagenfurt.