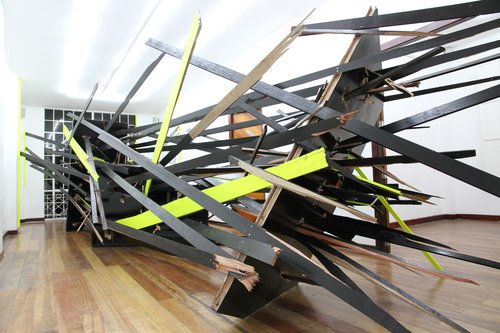 While some artists in "trigon 67" equated the expansion of space with an expansion of our perceptual limits, for others it implied a shift from traditional painting to three- dimensionality. What are the key aspects for artists working with space today? Is there any overlap to the ideas examined in 1967? And, how has our understanding of space expanded since then? Four artists from "trigon 67/17" will discuss their approach and their work, independent from and in relation to the current exhibition.

Clemens Hollerer (1975 Bruck/Mur, AT – Bad Gleichenberg, AT) studied photography at Higher Institute for Fine Arts in Antwerp and Ghent, Belgium. He has exhibited in Vienna’s MuseumsQuartier, in Brussels, New York, and Bologna. In 2011 he took part in the official, collateral program of the 54th Venice Biennale. In 2010 Hollerer was nominated for the Future Generation Art Price and for the Zurich Art Prize. Four years later, in 2014, he received the Austrian Federal Scholarship for division Visual Art.

Sonia Leimer (1977 Meran, IT – Wien, AT) has exhibited both nationally and internationally at institutions such as Leopold Museum in Vienna, MAK Center for Art and Architecture in Los Angeles and Salzburger Kunstverein, to name a few. Leimer’s work can be found in the permanent collections at Kunsthaus Bregenz, the Hammer Museum Los Angeles, and in the 21er Haus of the Belvedere in Vienna. In 2011, she was awarded the Paul-Flora-Preis from the State of Tyrol and South Tyrol. Between 2012 and 2015 she taught at the Academy of Fine Art in Vienna, where she received her degree in 2004.

Hans Schabus (1970 Watschig, AT – Wien, AT) is known for his monumental work „Das letzte Land“ for the Austrian Pavillion at the 40th Venice Biennale, transforming the identity and function of the Hoffmann Pavilion entirely. He has exhibited work at James Cohen Gallery in New York, at Kasseler Kunstverein, and the Barbican Centre in London, among others, and was a recipient of the Austrian Federal Scholarship in Visual Art (2002). In 2009 he not only received the Arnold-Bode-Preis but also the City of Vienna prize for visual art. Since 2014 he teaches at the University of Applied Art in Vienna.

Markus Wilfling (1966 Innsbruck, AT – Graz, AT) attended the Grazer Kunstgewerbeschule from 1988 to 1989 with a focus in painting, followed by a degree from the Academy of Fine Art in Vienna with Bruno Gironcoli. Wilfling is particularly well-known for his publicly installed shadow objects, i.e. of Graz’s famous clock tower (Uhrturm). In 2003 he was awarded the Diözese Graz-Seckau prize for contemporary visual art.