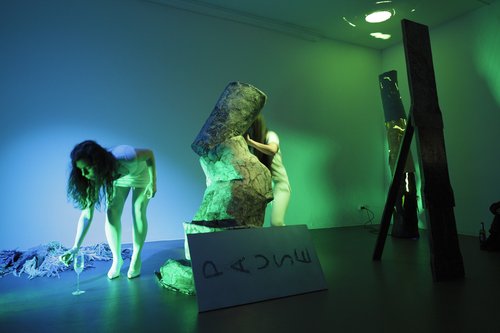 In the sequel of the quadrimonial performance series “The only performances that make it all the way” pieces and performances by Michele di Menna, Gina Pane, Liz Glynn and Guy de Cointet will enrich the existing setting.

The Canadian artist Michele di Menna merges in her performance “A few deep moments“, together with the artist Josefin Granqvist, elements out of performance, sculpture, text, collage and video into a distinct framework. As a choreographer within a world of images that underlies constant transformation, di Menna prefers the process of becoming to the aura of a stable installation work. Videos, collages, sculptures remain from the performances as debris of preceding events, but do function as original pieces in the sense of an environment acting primarily in a conceptual closesness to this exhibition.

The piece "Souvenir enroulé d'un matin bleu" by Gina Pane (*1939 in Biarritz; †1990 in Paris), a meaningful exponent within the field of Performance art, was shown for the first time in Turin in 1969. It is made up of a piece of blue felt rolled onto a wooden pole and fixed to a metal structure, on which the title is inscribed in Italian, the artist’s mother tongue. This work seems atypical, but foreshadows several aspects of Gina Pane’s subsequent artistic production. The exploration of individual memory and personal recollection goes on to play a fundamental role in the actions. Here, the title and sobriety of the image give the object a deeply intimate and poetic resonance.

The sculptures and performances by the American artist Liz Glynn often make reference to classical antiquity in order to explore contemporary culture as both, a legacy and an imperfect mirror of the crumbled empires of the past. She is particularly concerned with ruins: how they reflect the hubris of claims to permanence and rational systems, as well as how they provide an opening up to recycling, recuperation and transformation. For her performance “Starting with the Universe“ Glynn is looking at historic ideas about the shape of the universe drawn from theoretical physics.

Guy de Cointet (*1934 in Paris; †1983 in Los Angeles), a French-born artist based in California created text and sculptural works, often combining them as props and stage sets in theatrical performance pieces. The piece “Tell Me“ (1979–80) consisting of scenic objects that he showed in the format of a performance and, at the same time, as installation will be presented – with all its inherent whimsical specifics – as staged once in 1980 and also as a recent enactment with the original actresses Helen Berlant, Denise Domergue, and Jane Zingale. With this twofold presentation, questions related to the viewing of and deliberation on performative strategies by example of documentation, reception and history within the visual arts are put in a thrilling double field of vision.

Roland Rauschmeier’s "baumaxx inspired by bauhaus" (2011) transfers Oskar Schlemmer’s “Triadisches Ballett” from the year 1922 into the present day, into a store belonging to a large do-it-yourself chain. Taking up the rudiments of ballet—the backdrop, the music, and Schlemmer’s costumes—along with an exploration of the relations between people, production, and tools, the piece "baumaxx inspired by bauhaus" presents keyed up, expressive dance interludes playing out in the DIY store, with the dancers wearing readymade costumes from the store’s stocked shelves. The issue of the artwork in the age of technological reproducibility, which is essential in the eyes of the German avant-gardist, experiences colourful scrutinisation through the prevalent creative imperatives of a leisure and surplus society of wild bearing.