At the Barracks, Film screening 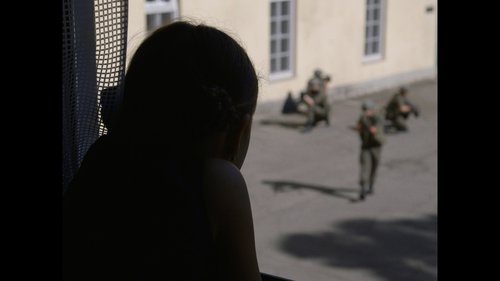 With “In der Kaserne” (At the Barracks) (2019) filmmaker Katharina Copony has created a family portrait spanning multiple generations. Her grandmother ran a military canteen for over twenty years in Southern Styria. Thus, Copony spent her childhood among soldiers, as did her mother and her siblings before her. The daily routine in the barracks is told from a female perspective in Copony’s film. By means of personal narration and reenactments Copony constructs a family history from the post-war era up until the late 1970s. After the screening there will be an opportunity to discuss questions on the central themes of the film and the exhibition “Image Wars. The Power of Images” – collective remembering with the help of images – with curator Jana Franze.

Katharina Copony (*1972 Graz, lives in Berlin and Vienna) is a filmmaker, who studied Visual Media Design with Peter Weibel at the University of Applied Arts in Vienna as well as at the Berlin University of the Arts. Departing from the field of video art and photography, her focus is on documentary film. She was an artist in residency in Japan, Rome, London, Sarajevo, and New York. As script & continuity she worked on numerous feature films. She taught at the Berlin University of the Arts and the Merzakademie Stuttgart. Among her latest documentaries are “In der Kaserne” (At the Barracks) (2019), “Moghe Paris – Und sie ziehen mit” (Moghe Paris – And They Are Joining In) (2016), “Spieler” (Player) (2014), and “Oceanul Mare” (2009).