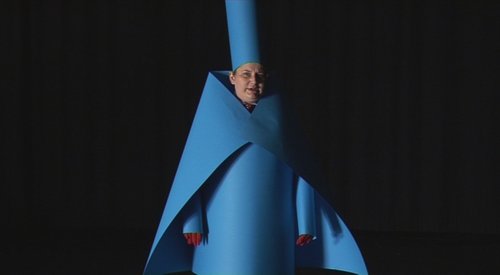 The third and second last opening of the, all in all, quadrimonial performance series “The only performances that make it all the way ...“ will be completed by works of Cosey Fanni Tutti and Pauline Boudry/Renate Lorenz, whereas Jakob Lena Knebl will emphazise the live program of the openings with the musical help by das_em.

The contribution of the London-based artist Cosey Fanni Tutti consists of photos, documenting her performance “Woman's Roll” that took place immediately prior to the very first Throbbing Gristle live performance at AIR Gallery London on 6th July 1976. Cosey Fanni Tutti: “A naked, silent gallery space. A key crossover point. I mark and activate that space in response to those who join me at that pivotal moment. I impart a deep connection with my inner 'self' and retain awareness of the sensibilities of those present. The action unfolds.” In another statement of 2010 the artist talks about her artistic practice: “My work has always been about communication of life experiences, about tuning into ‘why’ and ‘how’ we do things, about our tendency for acceptance of established conventional notions of self expression and ‘role’ play, and about causing a sense of unease which leads to questioning and action not passivity. I focus on personal experimentation, exploration, and exorcism. My art actions are governed only by unpremeditated response to the situation I place myself in. I locate myself in the neutral, mutual space between myself and those ‘watching’, where the ‘how’ and ‘why’ is non-specific to all and where intuition and spontaneous improvised simple actions hold meaning in their own right, and possibly different meaning to all who are present. In this way my work is a shared experience and I have freedom to embrace any means of expression.

In “DER LETZTE SCHUSS GING SAUBER DURCH´S BAROCK“ [the last shot went through the Baroque nicely] the Vienna-based performance artist Jakob Lena Knebl will question gender issues, normativity and the relation of horror and humor. As various sources from David Lynch's “Blue Velvet“ to even the musician’s Phil Collins 80-ies evergreen “Mama“ are used as a reference with respect to their uncanny potential and mirrored in a performative way. Perceptions of “reality” and “truth“ are analysed in regard to their artificialness and are reversed because of their dual character, as a production of reality that carries a possibility for intervention.

The film installation “No Future / No Past” by the two Berlin-based artists Pauline Boudry and Renate Lorenz is part of a series of two films that both work on punk archives from the period between 1976 and 2031, investigating the radical negativity, the self-destructiveness and the dystopia of this past moment. The work takes another look – anachronistically – at the punk policy of aggressively slating and rejecting the present without ever proposing its own movement as the guarantor of future social justice. The restaging of former self-empowering hyper-performativity manifests itself in “No Future / No Past” as subsequent dilemma of a retro-nostalgia, of which is reported in a relentlessly past perfect tense.

In the video work "Homestory (Il Cielo In Una Stanza)", the protagonist, who is played by Lisa Marie Janke, is situated in a continuous solo exhibition, sitting in a living space that seems familiar to her. The fully packed “North Face” backpack positioned next to her on the floor indicates that she has an urgent need to travel. She starts to give a quick overview of various meals, almost as if she were readily expressing visually perceived selections of food found in touristy locations of an urban beyond. The recited culinary surplus in this imaginary urban space of a vague desire to travel is contradicted by the tranquil state of the actual situation and leads to increasing exhaustion on the part of the protagonist. A yoga exercise ultimately offers equilibrium, thus helping her cope with the exertions of a journey that revealed its stress potential without even having been embarked upon.