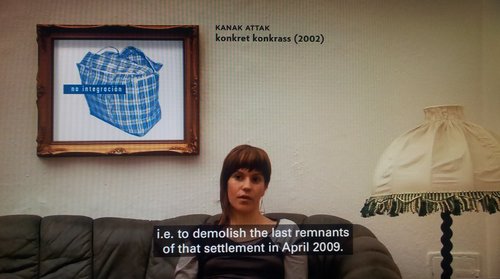 Eduard Freudmann and Ivana Marjanović, Uglyville – A Contention of Anti-Romaism in Europe, 2010
videostill

In her lecture Ivana Marjanović will present a selection from her curatorial and theoretical work of recent years and reflect on politics and aesthetics of interconnectedness.

In 2010 Marjanović directed (together with Eduard Freudmann) the film "Uglyville - A Contention of Anti-Romaism in Europe" that is based on her text "Contention of Anti-Romaism as a Part of the Process of the Decoloniality of Europe". The film is a critical analysis of the interrelation of racism and capitalism in so called New Europe (Europe after 1989) but also an exposure of strategies of resistance to their dominance.

Marjanović was born in 1979 in Yugoslavia and lives in Vienna since 2006. She is an art historian, cultural studies researcher, author, curator, cultural producer in the field of contemporary arts and theory, co-founder of the Kontekst Gallery in Belgrade, and member of Kontekst Collective. At the moment she is working on her PhD and related to it on the research project "Kvar Performance Politics" supported by daskunst / DIVERCITYLAB in
Vienna.

Eduard Freudmann and Ivana Marjanović, Uglyville – A Contention of Anti-Romaism in Europe, 2010
videostill