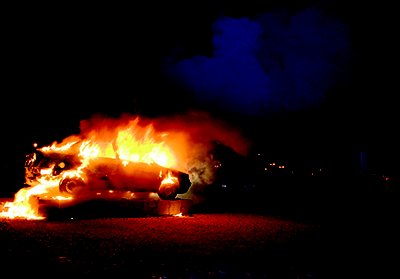 The supporting program “An Art Day’s Night” on the exhibition “… Was ist Kunst? … Resuming Fragmented Histories” will be opened by the performance "Eternal Flame of Rage“ of the artist Dalibor Martinis. The performance takes place on Thursday, 19th of September at 8 p.m. at the quarry “Tieber” on the northern city boundary of Graz (Pail 1, 8101 Gratkorn). Due the a limited number of participants and the explosive character of the event an application via telephone (+43 (0)316 740 084) is required.

“The project generates procedures of those acts of rebellion that take place irregularly but frequently at the periphery of big cities, and as a rule, are embodied by a burning car. It seems that this fragmented, pre-political, and unconnected expression of rage needs a burning car as a common sign. By performing the “artistic” action of burning a car, we intend to appropriate all such acts of dissatisfaction, rebellion, and rage that have already happened or will happen in different circumstances and different places. By placing this action in the context of art, we will maybe understand all the future car-burnings as parts of some more clearly structured conceptual framework. At the same time, we return back to the public space and social memory all those burning cars which burned, or will burn in Paris, Kairo, Baghdad, Berlin or Rio de Janeiro.”