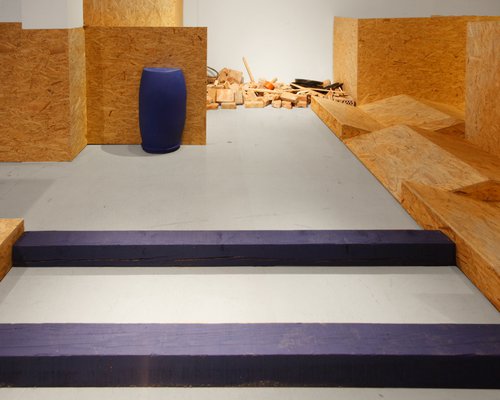 Processes of transfer in art and an understanding of exhibition space as a site for social discourse are central themes in the concept for the exhibition “The Sky Opens Twice” by Peles Empire. In the apse of the Künstlerhaus, the Berlin artist duo is reconstructing their “bar sculpture,” which was first seen in 2017 as part of the Skulptur Projekte in Münster. It is here that the “Bar Talks” invite visitors to gather in a relaxed, summery atmosphere to speak with local and international artists about creative activity, failure, and the art scene. In this context, the Künstlerhaus becomes a platform for exploration and encounter. In an informal talk with the audience and the KM– curatorial team, artistic techniques, thematic discourses, and the reception of art will be discussed.

Dejan Marković (*1983 Belgrade, lives in Graz) is a visual artist, lecturer, and research associate in the projects “The Incomputable” and “Curatorial Design” at the Institute for Contemporary Art (IZK) at Graz University of Technology. Marković studied visual arts at the University of Arts in Belgrade and then completed the master’s program Art in Context at Berlin University of the Arts. Since 2014 he has been a member of the group project “Art in the Underground” in the nGbK (neue Gesellschaft für bildende Kunst), Berlin.