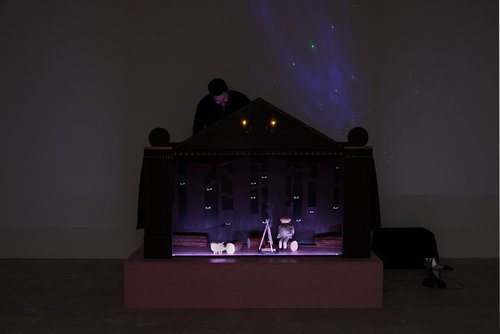 The beginning oft the quadrimonial Performance-series „The only performances that make it all the way ...“, that tries to keep the current variety of performative strategies and practices are experienceable through separate curatorial points will feature contributions by Carola Dertnig, Barbara T. Smith and Claus Richter.

The artist Carola Dertnig who is based in Vienna will present a curtain made of paper strips that separates the entrance from the main hall druing the exibition series. Visitors have to pass this in order to see the exhibition. Carola Dertnig installs precisely the object, which separates the audience from the stage, the spectators from the actors in theatres as brink that has to be transgressed. Beside the physical experience, Dertnig addresses the issue of the audience on a textual level, too. “Again Audience”, a poem written by the artist, which makes her range of associations accessible for the visitors, is copied on the curtain. A state of “rehearsal” is noticeable, as the title proposes, and also slight switch in thebinarity that is ever presumed in performative context from active (performer) versus passive (audience).

In the contribution of Barbara T. Smith, who is one of the most radical pioneers of performance art, a piece from 1974, Scan I, forty-five people dressed entirely in white with white hoods sat on bleachers in front of a television set as a metaphor for television “snow.” Like the cheering section at a football game, the performing audience responded to cues on the monitor that provoked various actions such as blowing bubble gum, cigarette smoking, sticking out their color painted tongues and blowing party blowers; creating a nonsensical “image.” After several “scans,” the art audience was invited to join the performers in the bleachers and try to decipher the cues imbedded in the television commercials whilst licking “all-day” suckers. This piece was a critique of television hypnosis. Scan I is an example one of her little known pieces that we will show complete with the hoods worn by performers and cue cards that the performing audience used.

The Live-element oft he first opening of the series will be provided by Claus Richter, who is living and working in Cologne since a few years. He is enthusiastic of Theme-Parks, world withdrawl and the shimmering promises of film, stage and consumerism. In 2010 he developed his first solo show at the Leopold Hoesch Museum in Düren full of sceneries, machines and posters. The Kölner Kunstverein presented his comprehensive toy collection in 2011 and for Cosima von Bonin’s „Cut! Cut! Cut!“ at the Museum Ludwig he built protective boxes for shy mussels. At the Künstlerhaus, Halle für Kunst & Medien, KM- he will present a recent puppet show, that he concieved himself for glove puppets „ Take care for yourself, Charliey!“ that will be a performance for three rats and shields.

The video "OszillEntreNous" documents the artistic interventions pursued by the artist in the “Golden Hall” of the Wiener Musikverein, a strongly codified place which, thanks to technical installations, is famous for its acoustics (“golden sound”). The 300 concertgoers and the pianist Paul Gulda, playing a digital Bösendorfer grand piano, listen to the concert directly at the ear via in-ear headphones. Yet the actual (concert) attraction—the instrument—is not audible in the video. Featured instead is the golden sound of ambient noise (coughing, the keystrokes of the pianist, etc.) that in other concert situations would be drowned out by the music. Therefore the video, as an autonomous piece, establishes a realm that allows everyone present in the concert hall to perform in symbiotic synchronicity, with the functional particles of communication between music and listener thus explored.